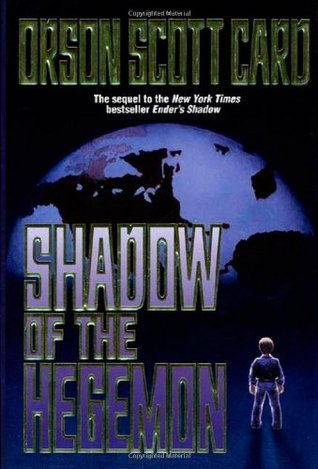 It’s almost fitting how the follow-on book in the spin-off series to Ender’s Game takes the same tactic as Speaker for the Dead and transforms itself into a completely different genre. While Speaker for the Dead and its sequels still maintained a level of science fiction for the Ender saga, Shadow of the Hegemon pivots into a political thriller with almost no hints of sci-fi to be seen. The strength of the characters helped make this transition relatively smooth, but it still highlights how these child-aged individuals hardly have any child-like qualities.

While the Shadow saga certainly needed to start out focusing on Bean, I did appreciate how Shadow of the Hegemon developed many of the supporting characters. For the first time in both series, I felt like the reader was able to know Petra and Peter while also seeing what Achilles was capable of accomplishing. The results of bringing back children war heroes to Earth had a logical feel to its progression, even if I didn’t really care much about southeastern Asian politics to really engage with the politics of the plot. That’s not to say the whole “cat and mouse” between Achilles and Bean wasn’t interesting; it just wasn’t what had brought me to this series in the first place.

Of course, having read the Ender saga first, I can already see the early ripples of how this side-series will start to wrap up. Now that Ender is less of a presence in the Shadow series, other characters finally have a chance to show what they can do. While I’ll reserve my predictions might change with what actually happens, I get the sense that Peter’s tenure as Hegemon changes the world just as Bean changes into some super-intelligent giant. I will admit that some of Orson Scott Card’s predictions from 2000 still seem plausible today, given the political climate, it’s clear that the author did his research before playing with the ever-important sci-fi “what if” scenario.

A political pivot from a well-known sci-fi series, I give Shadow of the Hegemon 4.0 stars out of 5.