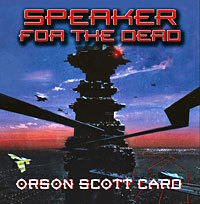 In this sequel to Ender’s Game, Orson Scott Card continues to provide a smartly-written plot that causes the reader to think about death in a whole new way. While the first book in the series gave some thought-provoking insights into war, simulation and the dangers of following orders, Speaker for the Dead examines cultural differences, religion, and the humanity of individuals who acted like monsters during their lives. Instead of moving on from the life of a deplorable person, Card manages to show the reader that a person’s life is made up of all its truths: the bad included with the good.

While Ender Wiggin seemed a little young in Ender’s Game, by Speaker for the Dead he’s aged into a wiser and much more complex character. His experiences in the first book helped to set him up as the universe’s devil and savior, a unique attribute set for a very cerebral character. I did appreciate how the physics of interstellar travel were used as limitations and constraints to make the situation of Ender’s age and experience much more believable. Of course, now that I’ve read the sequel to Ender’s Game, I’m not sure if the sub-plot with his siblings was nearly as important as I thought it would have been, thus making its omission from the movie a sensible choice.

What’s most intriguing about this science fiction adventure is how little science fiction is in it. Sure, there’s light-speed travel, alien creatures, and sentient computers, but when it comes down to it, the story is essentially a detective mystery solved by Ender Wiggin. Perhaps the sci-fi framework helped to create the ideal metaphor for understanding a culture different from our own, but these sci-fi elements could have easily been cut out, and a profound plot would have remained.

Another thought-provoking story in Ender Wiggin’s saga, I give Speaker for the Dead 4.5 stars out of 5.