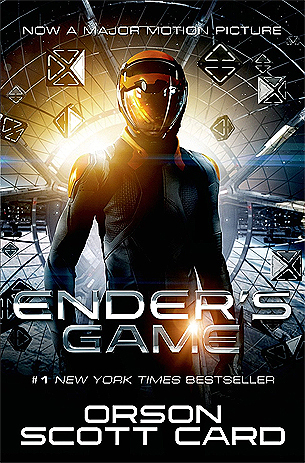 In another “lapse” of my reading habits, I didn’t manage to read Ender’s Game until the movie of the same name came out in 2013. At the time, all the sci-fi fans were eagerly anticipating a film that had taken over 25 years to finally become a reality. While I thought the movie was quite well done and engaging, after I read the book, I can understand why some of the diehard fans of the series were disappointed. As is usually the case with book-to-movie transitions, sub-plots often find themselves on the cutting room floor. Of course, I don’t blame them for cutting what they did; after all, it is called Ender’s Game.

Even though watching the movie first spoiled the exciting twist of the ending when I read the book, I almost read the book differently knowing how it would turn out. I could see the signs leading up to the shocking reveal, almost as if I had read it before. I did appreciate the sub-plot with Ender’s siblings and their efforts back on Earth as their brother was winning the war in space. If anything, it helped to break up the intense action surrounding the eponymous main character so that the reader could fully absorb what was happening in the universe on a political level as well as a military one.

It is disappointing that there will likely be no more movies in this series since the source material is full of interesting ideas that I’d like to see on the big screen. Perhaps the series would be better suited for a television show (a la Game of Thrones) to fully include all the different elements that made it a classic of sci-fi back in 1985. Either way, I look forward to exploring more of Orson Scott Card’s universe in the next book of the series: Speaker for the Dead.

A fantastic sci-fi story with an incredible twist ending, I give Ender’s Game 5.0 stars out of 5.