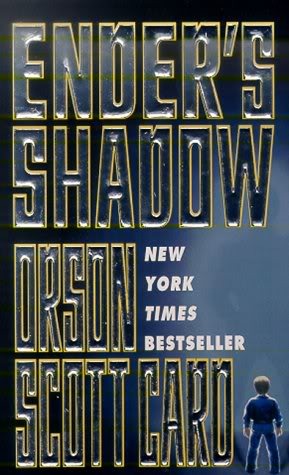 Those who have already read my reviews of the Ender Saga know I hold this series in high esteem. While this original series follows a format more similar to The Lord of the Rings—in that it starts with a singular prequel then advances into a three-book main story—approaching the first book in the series from another character’s point of view is a compelling tactic. Despite already knowing the outcome of most of the plot of Ender’s Shadow (via Ender’s Game), it was interesting to see how Card had improved his writing in the years since the original book in the series was released.

While Ender’s Shadow could stand on its own, the shocking reveal in Ender’s Game is something that I felt lacked the impact it had in this book. Additionally, there was an unusual amount of nudity, even if it was markedly non-sexual. In the end, though, Ender’s Shadow is an excellent setup to a true sequel series instead of having to endure the “time gap” that separates Ender’s Game from Speaker for the Dead. It helps that there’s an interesting character to follow with Bean and his unique upbringing and talents.

I did find it challenging to remember that Bean was only a kid during this book since he was basically written as an adult. Granted, there’s a logical explanation for this, and it fits the character. However, I caught myself more than once realizing that he’s only four years old for parts of this story. Of course, I also liked the precociousness of Bean, which is at least one of the reasons I look forward to reading the next book in this spinoff series.

A nearly perfect spinoff to one of the greatest sci-fi books of all time, I give Ender’s Shadow 4.5 stars out of 5.