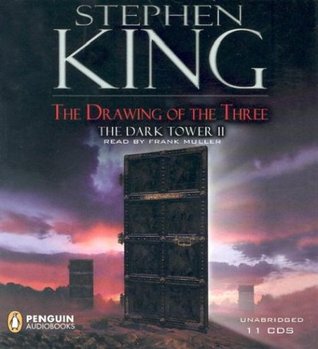 While it took me a while to get used to The Gunslinger, I was able to dive right in with The Drawing of the Three as I continue reading this Dark Tower series. Personally, I think the simplicity of the story and the immediacy of the danger helped to hook me from the start. Unlike the first book in the series, The Drawing of the Three has a solid set of relatable characters that are introduced just fast enough to get used to their unique personal challenges. If anything, these individuals piqued my interest, and I’m curious to see where their story goes from here.

One aspect of this book I found to be extremely entertaining was the action sequences. When there were stakes on the line, and things had to happen, the resulting action in these plot-moving points was both intense and hilarious. Generally, I am not much of a fan of the “fish out of water” approach to characters, but King makes it work here with The Gunslinger traveling back and forth between the worlds to take advantage of our modern wonders that help him survive in the fantastical world of the Dark Tower.

I also have to give kudos to the narrator of this work, Frank Muller, as his voice acting brought every character to vibrant life via their accents and verbal tics. I had no doubt who was speaking as he wove the story through his reading. Although, the one qualm I had with this book was that one of the characters was a bit grating on the nerves. While this added some excellent conflict to the story, it was annoying having to hear their manic voice for as long as I had to. I’m just glad that they weren’t the first character pulled into the Gunslinger’s world. Otherwise, I don’t know how I could have kept listening.

A superior and straightforward story in the Dark Tower series, I give The Drawing of the Three 4.5 stars out of 5.