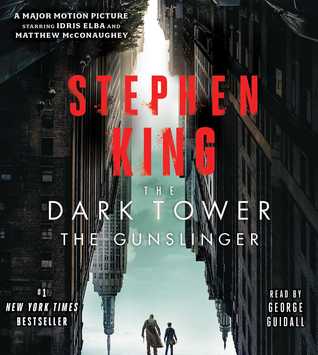 With the recent release of The Dark Tower (2017), I became interested in the book series that inspired the movie. I already knew the books would likely take a different direction from the film, and I was prepared for them. Up until now, I’ve enjoyed many of King’s other works, including The Shining, On Writing, and The Green Mile. That’s not to say I didn’t enjoy The Gunslinger; it’s more that most of his books have not been part of a larger series. I still want to know what happens in the next book of the Dark Tower series, so The Gunslinger certainly succeeded in that aspect.

Stephen King’s talent for description is in high form here as he crafts a world unlike our own but still linked to it via the wandering boy, Jake. Considering King’s background in describing all sorts of evil creatures and villains, the calm and calculating “Man in Black” is more terrifying than any violent antagonist, mostly with how psychological he is in his assaults against the eponymous Gunslinger. I also found following the main character of the Gunslinger led to an exciting journey as he overcomes the hurdles that prevent him from accomplishing his goal.

I understand that the first book in a series has a heavy burden to bear. It must introduce the characters and enough of their backstory to understand their motivation. It must also have a hook and be interesting enough by itself to warrant further reading. I probably could have done without some of the flashbacks and/or hallucination/memories, as they almost distracted from the action. I also felt this book didn’t necessarily cover enough ground, but I suppose that’s what the next books in the series will do: flesh out the conflict between the Gunslinger and the Man in Black.

A good foundation for a series that I hope improves over time; I give The Gunslinger 4.0 stars out of 5.