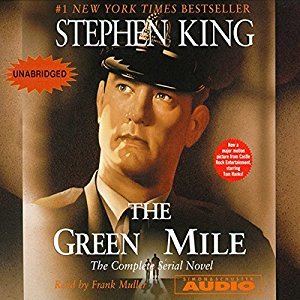 While most people might not realize Stephen King wrote The Green Mile, I was completely unaware that the original version of this book was released serially—much like Charles Dickens used to do with his books. The novelty of experimenting with this format is somewhat lost now that the volumes are collected together to create a whole narrative. Even so, King is still the master of his craft, even if there’s minimal “horror” contained within the walls of this prison. At least, it’s an expected horror through the system of capital punishment, and not tied to the terror of the unknown.

Even though I enjoyed this story for its characters and plot, one element stuck out like a sore thumb: the framing via the retirement home. Sure, there’s a neat twist involved near the end, but so often the narrative would pull away from the time period in the prison to show some parallels to retirement living in a distracting way. I don’t think this added much to the story and it seemed to be more of a diversion than a benefit to the plot as a whole. Either way, these moments are few and far between, which helps move the action along.

Overall, King’s descriptive writing brought much of the book to vivid life. His imaginative ideas and foreshadowing give the reader just enough information to figure out the real culprit of the crimes mere pages before the characters themselves were able to. Each of the characters is unique and has their own qualities that causes you to either love or hate them—depending on who they are. Even if you’re not a fan of Stephen King’s other works, I highly suggest you read The Green Mile, regardless.

A fantastic non-horror Stephen King novel, I give The Green Mile 4.5 stars out of 5.