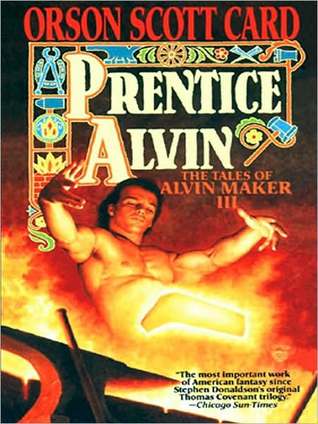 As I’ve been reading through the Tales of Alvin Maker series, I have found it interesting to see what big societal issues have been covered so far. While Seventh Son tackled religion and Red Prophet delved into politics and war, Prentice Alvin bit off a big chunk of racism and tried to address it in a way that’s half fantasy and half historical fiction. Sure, there’s still some semblance of the religion content present in this book that informs the racism dialogue. Still, these large issues end up taking a back seat to the more fascinating aspects of the titular character learning how to control his incredible powers.

In fact, this might be my favorite book of the series so far. It’s always more entertaining to watch a character come into the depth of their abilities, and Prentice Alvin has this in spades (both metaphorically and literally). While there weren’t many instances of Alvin directly being affected by a conflict that would require him to grow as a character, there were enough inevitable plot points that made me wonder how he would handle the situation. These twists helped to enforce the world-building that Orson Scott Card has excelled at for some time.

Perhaps the reason why I like this book as compared to its two predecessors comes down to how it focused more on the “magic” of this alternate history and less on the similarities to the American historical context. I’ve never been much of a fan of historical fiction, but I do appreciate explaining the events of the past through the lens of magical realism or fantasy. It’s likely why I’ll keep reading this series for the time being. At the very least, I’m curious how Alvin will grow from here, as he’s developed into a strong character who can basically do anything he wants.

A magical take on addressing the racism of America’s past, I give Prentice Alvin 4.5 stars out of 5.