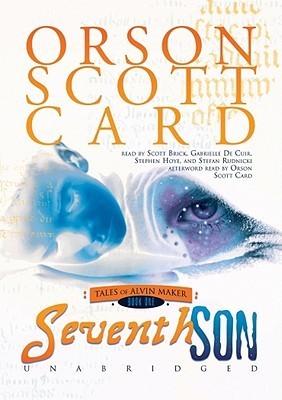 Having loved Orson Scott Card’s Ender Saga, I decided to start into another of his series, Tales of Alvin Maker. I was used to his science fiction writing, so I thought it would be interesting to see how he handled semi-historical fiction. For the first book in a series, Seventh Son certainly has its strengths and weaknesses. It’s clear this book came on the heels of the Ender Saga, as there are a lot of parallels between characters and motifs that I just couldn’t ignore. Not that that’s necessarily a bad thing by any means.

While the history of colonial America is the setting of Seventh Son, the fantasy elements added to it made for an interesting read. I did appreciate the distinctive “good vs. evil” conflict between the Makers and the Unmaker, even if it’s a little too tried and true. At the very least, while the religious characters had some amount of strawman characterization set against them, they were well rounded enough not to make the whole story seem too anti-Christian. They weren’t necessarily the enemies, but their ignorance factored into the enemy’s tactics.

Perhaps the little snippets of American history sprinkled throughout this book were what intrigued me the most. Sure, the superstition and “magic” involved in creating an alternate timeline of history made quite a bit of sense. However, without at least a cursory knowledge of these events and historical figures, then readers could potentially miss a lot of substance. As with the Ender Saga, Card uses his writing to dive into different theologies and philosophies that do more than merely entertain. The fact that books like this can be thought-provoking through solid characters is a testament to his talent as a writer.

An adequate start to a series with plenty of potential, I give Seventh Son 4.0 stars out of 5.