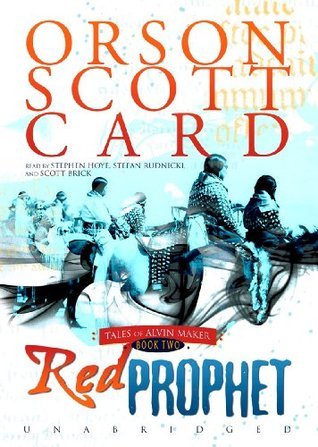 Continuing from the previous book in the Alvin Maker series, Red Prophet flashes back and shows certain events from a different point of view before driving forward into some fascinating alternate history. I continue to enjoy the fantastical elements brought into American history, even to the point of explaining how certain famous historical figures were the way they were. Although, if you know enough history, you’ll realize the fates of some of the characters presented in Red Prophet (William Henry Harrison, for instance) might not need the foreshadowing missing from this text.

While Seventh Son managed to set up this alternate history and establish some of its rules, Red Prophet delves into the action and excitement that comes from some of the more “kinetic” talents of these characters. Once the plot catches up with where Seventh Son left off, I was hooked. The interactions between Alvin and the Native Americans were quite interesting, and I found everything up until the climactic battle to be top-notch storytelling. Sure, it took a little while to get there, having to first set up the eponymous “Red Prophet” and his powers of observation, but it was worth it in the end.

My one qualm with this book lies in some of its more peculiar metaphor, allegory, and allusion. Near the end of the book, several scenes and sections feel entirely disjointed from the narrative. Perhaps they were to serve some “higher purpose” to lay out the moral of the story—or even the series as a whole. These scenes had characters who suddenly were ripped out of their normal behavior and put into a completely different context. And for what? To show that the history of the Native Americans is rich and varied while also infused with war and darkness? There had to be some other way to convey this than the way it was done here.

An action-packed follow-on to Seventh Son that gets a little too “heady” at times, I give Red Prophet 4.0 stars out of 5.