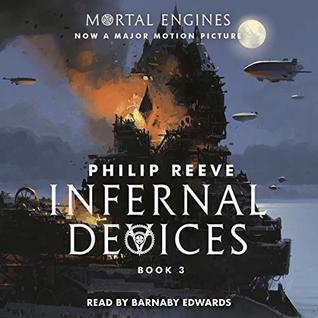 Wow. OK. Maybe this series isn’t for children as much as I thought it was. Sure, a post-apocalyptic world has many subjects that can be considered dark—death being the main one—but Infernal Devices certainly went all in here and pushed the ugliness of humanity to the forefront of the plot. Of course, one wonders if the POV change to focus on the progeny of the two characters who comprised the first two books is part of why the tone of this book changed so drastically. Sure, there was violence in the previous two books; it just didn’t seem so gratuitous then.

Aside from all the killing, which I suppose was meant to signify Hester’s character development, there wasn’t too much new in terms of world-building in this book. I appreciated all the developments in Mortal Engines and Predator’s Gold, but the addition of the African and Middle Eastern cities didn’t expound the “city-eat-city” world that much. Sure, there was more exploration of the Lost Boys concept, but it didn’t necessarily go any deeper than the basic idea presented in Predator’s Gold.

Despite the huge time gap between book two and Infernal Devices, I did find a few things to stand out in this part of the series. First was the epic battle between automatons. I felt the action in this scene, along with the other action scenes in this book, were well-described. Second, I don’t want to give away too much, but the twist ending was a bit of a shock—even if it made complete sense. For a series that usually hits many clichés and tropes of relationships, I was honestly shocked that the author went for this ending. Of course, the ending also leaves things unresolved enough to require another book, so there is that aspect to it which I can understand.

A jump ahead in time and the amount of violence, I give Infernal Devices 3.0 stars out of 5.