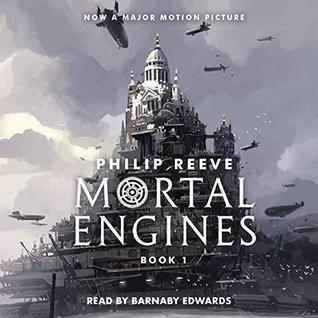 In yet another case of watching a movie first before reading the books, I finally got around to reading Mortal Engines after absolutely loving the 2018 movie. While I understand middle-grade or Young Adult readers are the intended audiences, it left me wanting in its presentation. Sure, most of the elements that made it into the film were there (with some less-than-necessary parts being cut from the screenplay for obvious reasons), but the way it was written felt a bit too flowery for my tastes. In fact, the engineer in me would have loved a lot more world-building than I got in this short volume.

I did still appreciate the post-apocalyptic steampunk world of Mortal Engines—if for no other reason than its ridiculous premise. The idea that whole cities would transform into moving monstrosities that devour lesser towns in a “predator and prey” relationship is such an intriguing notion that I had to give it a chance. Even if I don’t expect there to be movies to finish out the adaptation of the quartet of books, I can definitely look forward to exploring the rest of this series to have my world-building needs satiated in the next volume.

While the young protagonists were flat and singularly minded, some of the adults had enough meat on them to make their actions reasonable and realistic. Sure, there are always going to be clichés in stories meant for younger audiences. However, I don’t usually tolerate character-based clichés as much as I do plot-based ones. And while the writing certainly had a creative bent to its vocabulary, it became tiresome having to sit through it for a whole book. Purple prose is good in short bursts, but too much of a good thing can ruin the immersion of the reader.

A fantastic idea with semi-flat characters and far too flowery language, I give Mortal Engines 3.5 stars out of 5.