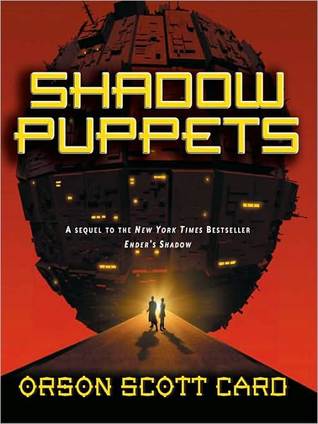 It’s odd for me to read the third book in a series and be confronted with problems that I usually see by the fourth book. So far, I’ve been on board with the whole Shadow series as it focuses on an interesting character in the form of Bean. For two books, I’ve read about Bean’s survival, made all the more thrilling by the antagonist Achilles. Of course, during Ender’s Shadow and Shadow of the Hegemon, the series picked up plenty of side stories and sub-plots. This is what ruined Shadow Puppets for me: the focus wasn’t on Bean and Achilles, but rather on advancing the story of all these sub-plots.

Now, don’t get me wrong, Shadow Puppets has a lot of interesting events. It’s just that it was so entertaining to read about Achilles in the previous books, and he’s relegated to a bookending motif for this book. We don’t get to see him directly interact with others, instead of having the main characters always wondering how he’ll react to their attempts to trap him. This kind of “telling” instead of “showing” really rubbed me the wrong way and made the climax of this story (let alone the first three books) feel quite anticlimactic.

I do appreciate some of what Card does with these well-rounded characters, and I want to see what happens next with a world in such turmoil and turnover. And yet, with how unfocused this book was, I don’t know if I want to get my hopes up for the next books in this series. After all, the central conflict of the previous two books is now behind Bean, which makes me wonder what could replace such a heart-pounding game of cat-and-mouse. There are plot threads to follow into the next book, but I could probably predict what happens just based on the foreshadowing contained in this book.

An unfocused and slightly anticlimactic conclusion to one of the best antagonists, I give Shadow Puppets 3.0 stars out of 5.