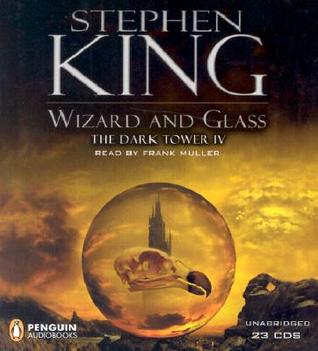 When I started reading Wizard and Glass, it became abundantly clear why The Waste Lands ended with a cliffhanger. While it would have been nice to have a short conclusion at the end of The Waste Lands, Wizard and Glass needed a small amount of framing. That way, it didn’t become a book entirely devoted to a flashback. Granted, the large majority of this book is a flashback, even to the point that I’d consider it to be a prequel. Fortunately, Roland’s backstory was something that desperately needed to be expounded upon in this series.

I know most writers are discouraged from using flashbacks, but in the context of a more extensive series, Wizard and Glass is an integral part of understanding how the Dark Tower universe works. Plus, Stephen King can get away with a lot since he’s so well established. In the end, this book works well because it is relational. Understanding Roland’s past and how he had loved and lost helped to make him not only more relatable but more human as well. Up until now, he was this stark, emotionless gunslinger whose only drive in life was to get to the Dark Tower.

While Wizard and Glass is undoubtedly one of the stronger books in the series, I felt there were a few elements that I didn’t like as much when compared to say, The Drawing of the Three (my current favorite in the series). There was plenty of sex in this book that, while somewhat necessary to the plot, was a bit over the top at times. Additionally, for a book that was as long as it was, I would think that more would have happened in it. As it is, there was a lot of talk about stuff happening, but no real action about it until near the end of the book. Still, I look forward to what will happen next.

A much-needed flashback/prequel for the Dark Tower series, I give Wizard and Glass 4.0 stars out of 5.