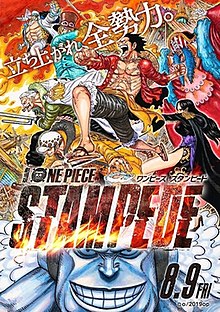 It’s interesting how different Japanese franchises handle their 20th-anniversary movies. In the case of Pokémon the Movie: I Choose You (2017), a nostalgia tactic was used to bring in those viewers who might not have seen a Pokémon movie since the anime started airing back in 1997. Two years later, and another well-known anime (or at least it should be well known) has a movie that celebrates the 20th year of its animated series. One Piece: Stampede (2019) takes a somewhat different tactic here and embraces everything that turned it into what it is today.

While anime movies rarely interact with the canon of the series they’re based on, it is essential to note that the author of the original manga did help create the story for Stampede. The reason why this is important is that this movie was able to bring together 20 years’ worth of extraordinarily overpowered and unique characters in a way that still somewhat made sense. Furthermore, it still somewhat tied to what One Piece is all about: finding Gol D. Roger’s treasure. Sure, there isn’t quite enough run-time to fully explore the characters or concepts, but the movie is betting that anyone coming to see it will already know who everyone is.

Extremely light on plot, Stampede takes advantage of its vast cast of characters to do what One Piece does well: over the top battle sequences. If these movies don’t have elements of fan fiction—which explores what would happen if characters from vastly different parts of the story came together—then what’s the point of even watching these movies at all? Some of the most unlikely partnerships can be seen in this film, and the results are epic in scale and power. I can’t imagine how the producers of such a work could top themselves after this movie, and I’m not sure they ever could.

An anime movie that embraces 20 years of uniquely overpowered characters, I give One Piece: Stampede 4.0 stars out of 5.