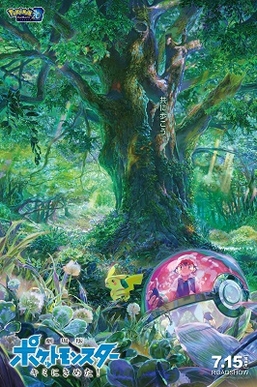 Over 20 years after its debut, it seems that Pokémon is not a fad and will be here to stay for the long haul. Of course, considering the mania surrounding the first games in the series back in the mid-1990’s, by now enough time has passed for nostalgia to be a contributing factor to the franchise’s continued success. The children who grew up with Pokémon are now adults in their late-20’s and early-30’s (i.e., “millennials”). In an attempt to cash in on this nostalgia, Pokémon’s latest movie, I Choose You! recounts some of the memorable first moments of the anime, but with a slightly different storyline.

Initially, I was worried that this plot would be a pared-down selection of key moments from the anime, much like what has been done with other anime movies like One Piece’s The Desert Princess and the Pirates (2007) and Episode of Chopper Plus(2008). Fortunately, this film managed to capitalize on some hindsight that ended up linking the first few episodes of the anime to significant plot points introduced in the second generation of games. Granted, this semi-ret-conning diverges from the anime plot (to a point where Team Rocket is completely uninvolved), but at least it provides a more cogent conclusion by the end of the film.

Some have bashed this movie for the controversial decision to give Pikachu an actual voice, but the nostalgia in me (partly from the anime, as much as from the first Pokémon movie) got chills during the climax of this film. That being said, I had trouble getting used to the new voice actors for this movie, which pulled me out of the nostalgia every now and again. In the end, the plot of this film probably follows a lot closer to the actual Pokémon games than the anime ever did, which is probably a plus considering some of the complaints many fans have about the anime.

A nostalgia trip for the millennials who grew up with Pokémon, I give I Choose You! 3.5 stars out of 5.