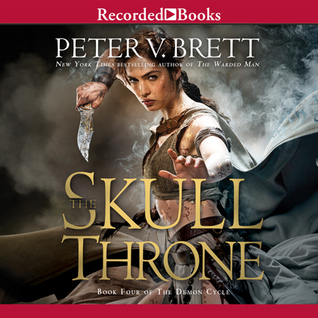 You’d think a book with (what I assume is) Renna Bales (nee Tanner) on the cover would follow her and the group of people she’s traveling with. You’d think a book titled “The Skull Throne” would spend a lot of time addressing the now-empty Skull Throne. Instead, we only got brief mentions of these two sub-plots. While I’m happy that the latter didn’t have many pages dedicated to it, I’m disappointed that the former was addressed for only a few scant sections at the beginning and end. Instead, the majority of this book spent time in places that didn’t advance the overall story at all.

Having read all the books (and the “3.5” novella) up until now, my concerns that arose during Messenger’s Legacy seem to have materialized. Sure, I do enjoy following the three main characters from The Warded Man, but there were certainly moments where I thought I was reading something from the Song of Ice and Fire series than The Demon Cycle series. This might be high praise for some, but I felt George R.R. Martin’s series was a little bloated and too concerned with relationship drama than actual dragons.

Additionally, I’m still having trouble caring about the Krasians. The fact that there are so many terms and titles for everyday things and people makes it confusing to follow at times. I understand its origins in Middle-eastern culture, but at some point, it goes too far (xkcd had a comic about the number of made-up words in a fantasy book reducing its quality). The culture clash between the Krasians and everyone else has persisted for three books now, and it’s quite tiring to keep highlighting how different and backward their thinking it sometimes. I can only hope we get to see some demon battles in The Core since this book left me unsatisfied.

A weak link that could have spent more time on more exciting subplots, I give The Skull Throne 3.0 stars out of 5.