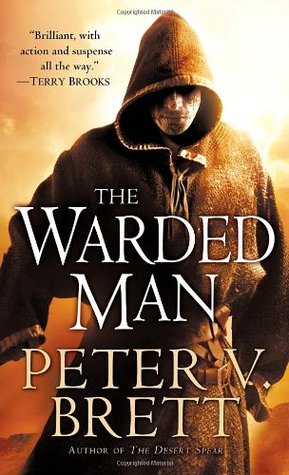 For anyone who thinks that fantasy is a childish genre, The Warded Man shows that it can have very adult themes. While this adds an element of realism by including sex and violence, it also means that the intended audience for this book should be mature enough to be able to pay attention. Unfortunately, this book takes a repetitive approach with its character arcs, almost as if writing for children who need the point constantly driven home. In the end, I’m mostly just disappointed at what this book could have been instead of what it was.

I’m not sure if there’s a minimum page count/word count for fantasy books, but The Warded Man seems to be an interesting novella, padded out with tons of unnecessary backstory—or at least backstory that could be covered in a relevant line or paragraph when needed. I did like the concept and the magical system in this book. Heck, I thought the naming scheme for the minor characters was also quite brilliant. I just can’t bring myself to suggest that people slog through over 450 pages of story that could have easily been covered in 150.

If you are interested in a somewhat original fantasy story, you can literally pick up the book at the beginning of Part 3 and read to the end, and you won’t miss much (if anything, you won’t get some establishing details). This was also exacerbated by the fact that at least one of these characters didn’t have an interesting story until Part 3, so it was a bit annoying to have to jump over to his story when I’d much rather read about the other two characters. As it’s written right now, many of the characters’ motivations are repeatedly brought up in similar situations, so all the first part of the book does is delay these three characters’ inevitable meeting.

A great concept for a novella with a ton of backstory tacked on the front, I give The Warded Man 3.5 stars out of 5.