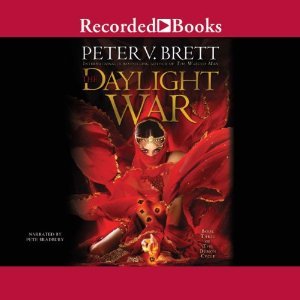 I’m glad to see that it only took two books for Peter V. Brett to cut down on some of the extraneous flashbacks and exposition in the Demon Cycle series. While whole chunks of The Warded Man could have been cut with nothing significant lost in the process, and The Desert Spear had what appeared to be an unrelated storyline that weaved through the narrative, The Daylight War has a minimal amount of this “fluff.” Granted, there is still some amount of world-building that helped to explain yet another aspect of this setting, but it’s minimal in comparison to its predecessors.

Additionally, I already knew this series was an adult fantasy from my experience with The Warded Man and The Desert Spear. These are tame when compared to the third entry in the series. The sex in this book made the previous two look like nuns in comparison. Sure, it could be argued that it “adds to the plot” in a few spots, but I’m just used to it at this point. At any rate, the differences between the two different cultures hearken back to the European and Middle-eastern cultures that undoubtedly influenced them, which also would explain the adult nature of these books.

As for the plot, the first two books seemed to set up the far superior plot in this book. While The Warded Man followed one deliverer’s path, and The Desert Spear explored an equally-gifted deliverer from a different culture, The Daylight War revealed how similar—and how different—these two men are. I don’t know if I liked the “mindreading” aspect of these individuals’ new power, as it seemed a little like lazy writing at times, but the addition of the warded skills to take on a severe threat from the demons was entertaining as always.

An adult fantasy that has finally cut a lot of the fluff of its predecessors, I give The Daylight War 4.0 stars out of 5.