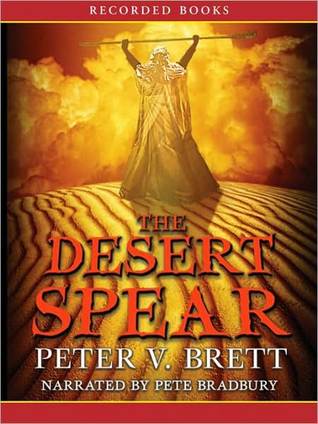 The second book in the Demon Cycle series, The Desert Spear practically proves my point that its predecessor, The Warded Man, started in the wrong place. In fact, if there weren’t an awesome battle sequence at the end of The Warded Man, I’d suggest just skipping to The Desert Spear since all the key moments from the first book were referenced in this sequel. That being said, this book has some of its own issues, some of which are gripes I continue to have about this series—which makes me think this is just the way these books are going to be.

Before I get too far down the criticism hole, I do want to say that I truly enjoy the magic system in these books. The Desert Spear doesn’t necessarily do anything new with it, but there’s at least a little more world building that happens in terms of the demons that I would have liked to see integrated more fully into the story. I like the idea of wards essentially being “computer programs” in a fantasy space, which is probably why I’ll continue to read this series. I’ll also say that the depth of the cultures presented in this book are top-notch and the action is expertly-described.

All this being said, there’s a lot of fluff in this book. The entire first third was practically a prologue to the meeting of the “desert” forces and the “forest” people, most of which could have easily been condensed. Even what I thought was a side story seemed to be only added as a way to integrate a short piece of essential plot near the end of the book. Despite being wordy, these moments were slightly necessary. Additionally, the “modern” sensibilities of Leesha are admirable for a woman in a fantasy setting but most of the time just pulled me out of the story because they didn’t necessarily match the timeframe where it was set.

A book that continues with great world building but in far too many words, I give The Desert Spear 3.5 stars out of 5.