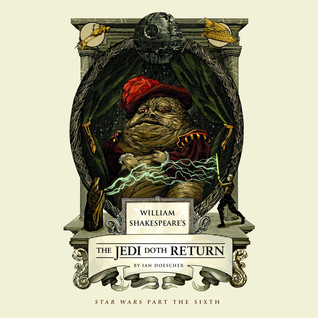 Of the original Star Wars trilogy, Return of the Jedi has been my favorite for as long as I can remember. I enjoyed how there was some finality to the stories started back in A New Hope, and Empire Strikes Back. Plus, there were a ton of neat creatures (like the Rancor and Sarlacc) and machines (like the Speeder bikes and AT-STs) that grabbed my attention from a young age. Sure, I can understand the depth of Empire Strikes Back now that I’m an adult, but Return of the Jedi always holds that element of nostalgia for me.

So, how does the Shakespearean version of my favorite Star Wars story stack up? If anything, Shakespeare’s The Jedi Doth Return is consistent with its predecessors, Verily, a New Hope and The Empire Striketh Back. I enjoyed the voice acting and the little changes that made the audiobook more than just a Shakespearean reading of the screenplay. Of course, having listened to three books of this fantastic mashup, it has almost overstayed its welcome. Almost. I still think it’s a genius fusion of two pop culture masterpieces, but at what point does it lose its originality?

Sure, The Jedi Doth Return adds some new bits like songs (which land just about as well as the “added” songs in the 1997 Special Edition re-release). Overall, though, I was a little taken aback at how little dialogue there was in it. Most of the action was described either in chorus or soliloquy, which merely highlighted how much action was present in the original movie. This is great for an action-packed conclusion on the big screen, but it doesn’t land quite as well on the printed page (or audiobook). Despite this, I still think fans of either Star Wars or Shakespeare (or both) should give it a read.

Another consistently funny mash-up of archaic speech and futuristic sci-fi, I give Shakespeare’s The Jedi Doth Return 4.5 stars out of 5.