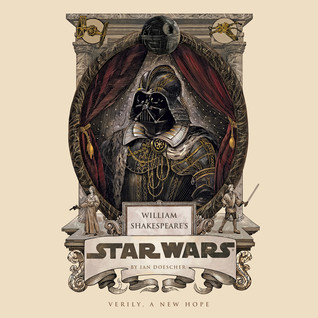 To be honest, if someone were to stage this version of Star Wars, I’d pay to see it in a heartbeat. Not only does the basic plot from the movie transfer over almost flawlessly, but the addition of the Shakespeare dialogue and verbiage made this way more entertaining than it had any right to be. I particularly enjoyed the soliloquies presented by many of the characters, my favorite being that of R2-D2 and what was going through the functionally-mute droid as the events unfolded.

I think part of what added to my enjoyment of this book was listening to the audiobook version. Not only were the various voice actors perfect for their roles—as they were able to match the cadence of Shakespeare, but also of the original lines as well—but the added sound effects immersed me in the Star Wars experience. Those who find Shakespeare to be a bit tedious might discover that this adaptation doesn’t help much, as the Shakespearean style lasts throughout the book. However, for fans of both Shakespeare and Star Wars, this is a perfect match made in a galaxy far far away.

A peculiar but quite fantastic mash-up, I give Shakespeare’s Star Wars 5.0 stars out of 5.