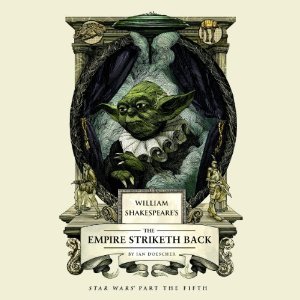 I said it for my review of Shakespeare’s Star Wars, and I’ll say it again: this combination of old verbiage and meter with popular science fiction is a match made in heaven. The follow-up to the first part of the original trilogy, Shakespeare’s The Empire Striketh Back continues to be an amusing exercise that anyone who loves Shakespeare and/or Star Wars will enjoy. Some consider Empire to be the best part of the original trilogy, and its adherence to the plot won’t disappoint. Additionally, the audiobook version continues to use music, sound effects, and voice acting to recreate an experience as close to the source material as possible.

While the audiobook did provide a robust experience of the text (especially the voice actors who recreated Han Solo and C-3PO’s speech patterns), the author’s explanation at the end made me realize there were some aspects that weren’t quite as clear as they would have been if I had just read the book normally. For instance, Yoda’s typically backward speech wasn’t as backward as I would have thought—mostly because the Shakespearean cadence sounds a little backward. Instead, Yoda spoke in haiku, which I’m sure would have been more evident if I was reading the words on the page.

As I mentioned above, Empire is the favorite of many Star Wars fans. However, I’m one of the rare few (like the author) who find Return of the Jedi to be their favorite of these first three films. Consequently, since this book held close to the original plot, it seemed to sag a little between the opening act on Hoth and the third act in Cloud City. At least the added soliloquies from ancillary characters like the AT-AT walkers, random Stormtroopers, and the dangerous creatures of the universe added in some humorous elements to the narrative that weren’t strictly canon.

A fantastic audiobook that still might require a read-through, I give Shakespeare’s The Empire Striketh Back 4.5 stars out of 5.