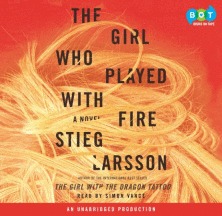 Despite some of its weaknesses, some of which were due to my reading it via audiobook, The Girl with the Dragon Tattoo is a great book. In its sequel, The Girl Who Played with Fire, some of these weaknesses were addressed, but others manifested in their place. Again, these faults might be attributed to the audiobook format, but are fairly minor when considering how fantastic the story is as a whole. In fact, I probably like The Girl Who Played with Fire more than its predecessor. Of course, part of this was how events in the first book carried over to influence the plot of the second.

In the first book of the Millennium series, I didn’t realize just how much sex was in it. This was mostly because of the rape scene that made everything else seem tame in comparison. In this book, the sex is still there, but there’s so much of it at the beginning that it starts to become distracting. At least when book one included it, it was generally through the guise of a budding friendship. This time, it felt more like the author was trying to hammer home the point that the two main characters were sexually liberated. Other than that, it was also a little challenging to keep track of the timeline, since it jumped around a bit when it followed different characters. This is perhaps a limitation of the audiobook format.

Overall, though, the plot of The Girl Who Played with Fire is superb. Uncovering the past of our favorite, titular character was a great way to continue a series that started with such an engaging and enigmatic figure. With less mystery present in this volume, the twists are still believable and entertaining while also focusing more on the action that centers on Lisbeth Salander’s desire to remain as disconnected as possible.

A fantastic follow-up to a great book, I give The Girl Who Played with Fire 4.0 stars out of 5.