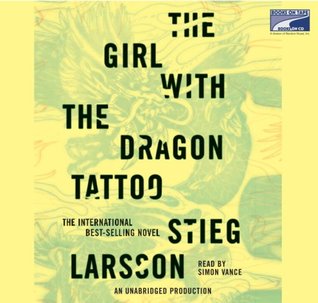 For many years, I was hesitant to read this book, mostly due to a few intense sequences that I saw in the David Fincher film adaptation. I wasn’t sure I wanted to be subjected to them in book form any more than I had been already. Fortunately, these scenes were quite a bit more tolerable in the book, mostly because the descriptions weren’t nearly as visceral as watching them on the big screen. I’m only now kicking myself for waiting this long to read such a fantastic book. While the book and the movie diverge in a few spots, I can see the reasoning behind the differences.

When it comes right down to it, The Girl with the Dragon Tattoo is a showcase for its titular character. Lisbeth Salander is tough, smart, and an overall entertaining individual to follow. While it takes quite a while for her to become involved in the main plot, at least the Mikael Blomkvist sections are still interesting enough to carry themselves until that point where the two characters join forces. I did find the distinction between these two characters’ plotlines a little hard to follow early on, but that’s likely an artifact of listening to the audiobook version.

I did find it a little odd that the book essentially starts with the introduction of Mikael’s investigation, only to take almost half the book to start it. Granted, this allowed plenty of room for both Mikael and Lisbeth to be developed as characters, but it felt a little like a sudden realization that the primary focus of the plot wasn’t addressed up until that point. Additionally, I did like the framing of the book around Mikael’s Millennium problems, especially with the much more thorough ending that tied everything up with a nice little bow.

A great book with fantastic characters, I give The Girl with the Dragon Tattoo 4.0 stars out of 5.