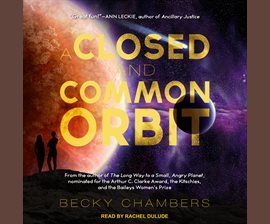 After the refreshing sci-fi The Long Way to a Small, Angry Planet, I was ready to follow the crew of the Wayfarer to their next adventure. Unfortunately, the sequel, A Closed and Common Orbit, decided to take a path more akin to The Godfather Part II (1974). Instead of following the main characters of the first story, this sequel delved into the new life of the AI now known as Sidra, while also interspersing a quasi-related prequel story of one of the new characters introduced in this book. Fortunately, these two stories were well paced against each other.

Even though I feel readers could pick up this book without having read The Long Way to a Small, Angry Planet, there are certainly a few details about the diverse races found in this universe left out of this book—probably for the sake of brevity. This didn’t necessarily detract from the enjoyment of A Closed and Common Orbit, but having that previous knowledge certainly helped to bring these alien creatures to life in my mind. Still, the main characters are basically humans, so the interactions with the aliens would be the main reason to know how these creatures communicate.

While this book is only tangentially related to the one that proceeded it in the series, the universe the author has created is solid enough to support a few more additional stories like the ones found here. With fewer characters to focus on in this book, A Closed and Common Orbit was able to dive deep into some pretty heavy topics, including child slavery and artificial intelligence. The writing still retains its casual dialogue style that genuinely helped bring these few characters to life. If anything, the author’s writing is what will keep me coming back to this series.

A mostly unrelated, but still expertly written sequel, I give A Closed and Common Orbit 4.0 stars out of 5.