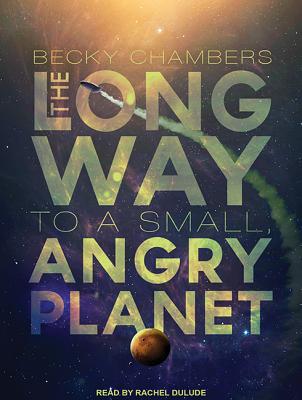 One of the biggest qualms I have with a lot of modern science fiction is that it’s not nearly imaginative enough. I believe most of this stems from the fact that modern sci-fi authors were influenced by franchises like Star Trek and Star Wars, where even the aliens are basically humanoids with different skin color. In The Long Way to a Small, Angry Planet, author Becky Chambers takes a great leap forward for sci-fi by exploring what it would be like to work on a spaceship with a variety of different species. Needless to say, there are plenty of “cultural” adaptations that one would need to make in such a situation.

Unfortunately, because the characters are so interesting, the main plot takes a back seat for the majority of the book. Instead, the reader is treated to a series of almost “episodic” moments between the crew that act as excellent exposition, but take up most of the space of the book due to the size of the crew. Aside from that, there were a few crewmembers that initially didn’t stand out, and it took me a while to realize they were two different people. I also can see how Kizzy could come across as “cute and energetic,” but I found her mostly to be childish, obnoxious, and annoying (she got on my introvert nerves).

In the end, the inclusion of lots of aliens with different cultures allowed for a simple way to include more non-traditional relationships in the book as well. With plenty of LGBTQ+ referenced in this book, none of it came off as judgmental, but it will still be a little jarring for people who aren’t used to reading books with these themes included in them. Still, the heart of science fiction is exploring the new and unknown, which this book does excellently. Fans of Firefly will probably be the most satisfied with this series, as the eclectic crew presented here seems to mirror that show’s charm and personality.

A sci-fi book that finally includes aliens that aren’t so human, I give The Long Way to a Small, Angry Planet 4.0 stars out of 5.