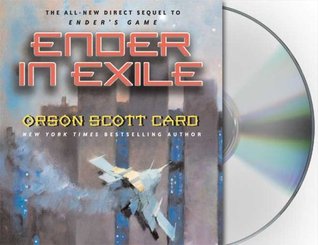 When it comes to the Ender saga, I was excited to read the direct sequel to Ender’s Game, Ender in Exile. After all, Speaker for the Dead was set so far after the events in Ender’s Game that there was a distinct division between the first book in the series and the following three (almost like The Hobbit when compared to The Lord of the Rings). And yet, while there was a huge gap between the first two books of the Ender saga, there was enough explanation about what had happened between them that Ender in Exile seemed a little unnecessary.

My biggest problem with this book was that I haven’t started on the Shadow spinoff series, so a lot of the revelations presented in this book essentially spoiled those books for me. If you’re wondering when to read Ender in Exile, I’d suggest reading Ender’s Game, followed by the Shadow saga, and then read this book before continuing to the end of the Ender saga with Speaker for the Dead. I’ll still read the Shadow series, mostly because I want to know the details of these other characters’ lives, but now I have an idea what the twists will be.

Despite telling a story that perhaps doesn’t need to be told, I am still impressed with Orson Scott Card’s ability to write plots that require a lot of tough decisions on behalf of the characters. I also enjoy how strategic Ender and Graff are when dealing with circumstances that I’m sure most sci-fi authors would never think to include in their stories. In the end, while I have raved about the main Ender series, this feels a bit tacked on and only exists to explain away a few continuity errors that were present in the first books before they expanded into the universe they now inhabit.

The direct sequel to Ender’s Game that didn’t necessarily need to be written, I give Ender in Exile 3.5 stars out of 5.