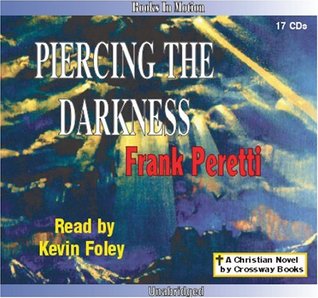 It’s weird how something that was done so well the first time loses all its magic during a sequel. I absolutely loved This Present Darkness, as I felt it accurately captured the invisible war of the spiritual world while also providing a gripping thriller in the human realm to keep the action moving forward. I was not impressed with the follow-up book, Piercing the Darkness. If it was a separate story with separate characters, I might have gotten into it more, but as it is, the tie-in to the first book seemed sloppy and almost unnecessary.

Almost every part of This Present Darkness that I thought was amazing seemed copied into Piercing the Darkness, but without the stakes or “oomph” to make the plot even semi-interesting. I think the reason for this was that most of the subtlety was gone from the characters. It’s a little more terrifying when you learn that normal, everyday people are being controlled by demons, but when a fully-functioning Satanic cult is your antagonist, it just seems like the author isn’t trying that hard. Of course, there wasn’t much of a reason behind the “evil side’s” plans in this book, other than to ruin a Christian school. At least in the original book, a whole town was at stake.

Perhaps Peretti was pandering a bit too much to his core demographic here, but it almost seemed like all the characters were caricatures, with no ambiguity to make the reader wonder whose side they were on. I won’t even mention the few plot holes I noticed, some of which came to light during the trial portion of the plot since it’s pretty apparent how everything’s going to turn out from the beginning. Good triumphs, evil is defeated, blah blah blah. In short, this book reads more like a sermon. The thrill is gone.

A sub-par follow-up to a fantastic book, I give Piercing the Darkness 2.0 stars out of 5.