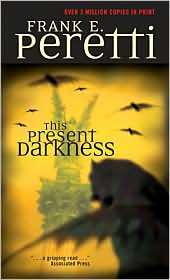 Back in high school, I had to read this book as part of my Religions class and thought it was pretty good. As I have been preparing for writing The Slumberealm Gambit, I decided to give This Present Darkness another read so I could recall how Peretti combined the fantastical spirit world with the real world. For a book written in 1986, it’s aged surprisingly well, even if the demise of the newspaper and the rise of constant contact via cell phones would make this kind of book set in modern times a hard sell. Even so, I honestly wouldn’t mind if someone adapted this book into a movie, as the plot is thrilling and the action is top-notch.

Strangely enough, one of my qualms with this book is with its formatting and proofreading. There were a few missed typos, and the right-align text didn’t seem as professional as I would have hoped a widely-printed book would be. Regarding content, though, I wonder if the preacher side plot could have either been cut or enhanced so that it would have had the same intensity/focus as the newspaper main plot. Still, by the end of the book, the exciting conclusion is a result of all the pieces being put in place during the somewhat long buildup.

Some people may debate whether angels and demons are real, but this book certainly gives a fantastical look behind the curtain and imagines these beings in elaborate detail. The angels are all quietly patient, while the demons are gruesome and horrifying. The mixture of fantasy imagery and real-world situations is something I hope to soon accomplish in my own writing style, and this book merely reinforced how awesome it was when I read it for the first time more than a decade ago.

An action-filled and thrilling look behind the spiritual curtain, I give This Present Darkness 4.5 stars out of 5.