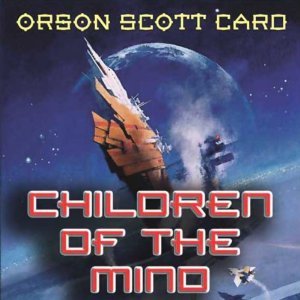 Just like Xenocide before it, Children of the Mind is difficult to separate from the previous books in the Ender’s Game series. In fact, Xenocide and Children of the Mind are considered by Orson Scott Card to merely be two parts of the same book, separated at a point in the plot that makes sense. Even further to the point, I would consider Children of the Mind the last “part” of a story that stretches across four books. While it was easy to take Ender’s Game by itself, every additional piece of the story needs the previous parts for it to have the full impact of what Card was trying to accomplish.

What’s most interesting about this series is how each book has a different focus, almost putting them in distinct genres. Ender’s Game was militaristic sci-fi, while Speaker of the Dead was more along the lines of a mystery. And while Xenocide was the philosophical heart of the series, Children of the Mind was almost a romance in comparison. I appreciated the loose strings and sub-plots being tied up by the end of Children of the Mind, especially when it came to defining the relationships between the characters I had come to know over the last few books.

Even though the basic plot of these last three books was a simple “avoid destruction” motif, the complexity of the whole scenario did require the amount of text dedicated to it. Each element of these stories came into play in some fashion to create a satisfying ending. I’m still in awe of the technological foresight and brilliant solutions to fundamental physics limitations that Card was able to develop in these four books. I rarely have found a series that has been so consistently good across all parts of its story, and I believe the saga of Ender Wiggin is now my new favorite.

A satisfying ending to an incredible series of books, I give Children of the Mind 5.0 stars out of 5.