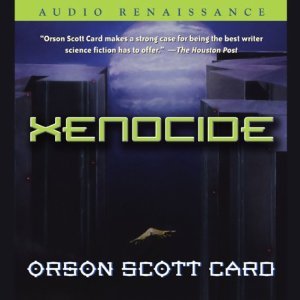 Much like authors Jules Verne and H.G. Wells were well ahead of their time in their science fiction writing, Orson Scott Card once again shows that he understood some of the key concepts of our universe. Written in 1991, Card’s Xenocide deepens and furthers the continuing adventure of Ender Wiggin that he began back in Ender’s Game. Picking up where Speaker for the Dead left off, Xenocide adds a powerful adversary while also tying plot points back to the first book in the series. In this sense, the tight intertwining of Xenocide with its predecessors makes it difficult to separate and review by itself.

I appreciate what Card has done by creating a multi-book narrative that requires the reader to have started from the very beginning of the story. While Xenocide is not nearly the end of the series, as made clear by the astounding twist near the end, it does pull enough unresolved threads from Ender’s Game and Speaker for the Dead to create the next segment of the story. In this sense, the whole story is a multi-book epic so well-written that no detail or specific piece of continuity is overlooked. Plus, with so much history behind it, Xenocide reads at a frenetic pace, just trying to “beat the clock” of an almost assured planetary destruction.

Surprisingly, if you told me that there was a sci-fi book comprised almost entirely of dialogue and profound, philosophical arguments, I would probably assume it was boring (or at least written by Robert Heinlein). And yet, Card has brought the reasoning proposed in the previous books of this series and pulled them through to their logical conclusions, creating an engaging discussion of artificial intelligence and sentience, while wrapping the whole thing in the context of moral arguments for and against exterminating an entire species. There are no easy answers in this book, but Card has masterfully included concepts like cloud computing, interdimensional travel, and genetic engineering to get his point across.

A fantastic continuation of Ender Wiggin’s story that leaves the reader begging for more, I give Xenocide 5.0 stars out of 5.