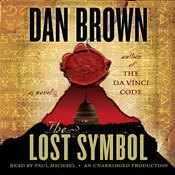 After Dan Brown’s previous entries in the Robert Langdon series had covered the Illuminati and the Catholic Church, respectively, his next target in The Lost Symbol was the Masons. Unfortunately, as both National Treasure (2004) and its sequel, National Treasure: Book of Secrets (2007), were released before this book came out, the setting and concept seemed derivative in The Lost Symbol. Especially with the focus on the Masons’ “treasure” for the better part of the book, I was half expecting the chase to be on a larger scale than just hopping from one Washington D.C. monument to the next as the puzzle unfolds.

In a bit of a combination of Angels & Demons and The Da Vinci Code, The Lost Symbol combines the exciting twists of uncovering the secrets of a Masonic pyramid with the pseudoscience of Noetics. Of course, the plot could have omitted everything about Noetics, and it would have stood just fine on its own, so I question why it was even needed at all, except for some familial drama and a series of wordplays near the end of the book. In my mind, the puzzle-solving element brought over from The Da Vinci Code was much stronger than the “science” brought over from Angels & Demons.

As for the book’s antagonist, I initially felt he was merely formulaic to the other enemies from previous Robert Langdon books. After all, when you have a self-motivated Illuminati Agent in Angels & Demons and an albino religious zealot in The Da Vinci Code when you have a tattooed Masonic muscleman as the antagonist in The Lost Symbol, you start to see the similarities. At least this time the antagonist had a great twist near the end. However, like some of the other “twists” in this book, if you were paying close enough attention, you would have figured it out before its reveal.

A procedural combination of the previous two books in the Robert Langdon series, I give The Lost Symbol 3.5 stars out of 5.