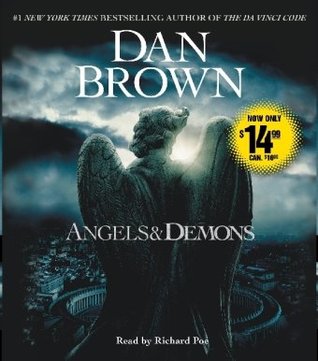 While Angels and Demons is not nearly as popular as its sequel, the famous (if not infamous) The Da Vinci Code, the elements which led to its successor’s success are certainly all contained within this first book in the Robert Langdon series. Of course, just because you have the materials to build a nice house doesn’t mean that it magically becomes a mansion. Despite containing many of the elements that made The Da Vinci Code so good, Angels and Demons feels a little underdeveloped in quite a few areas.

First, the protagonist, Robert Langdon, is supposed to feel like an “Indiana Jones”-type character, but with a specialty like symbology as his background, I just can’t buy the action-hero transformation of this everyday academic. Add to this the almost repetitive nature of his “discoveries” wherein he makes an assessment, then goes to the location of the assessment only to find that he didn’t think of it in the right way and thus requiring the whole plot to shift gears as he rushes to the new location. He eventually had better predictions, but by then it felt repetitive.

Secondly, the whole “treasure hunt” to find the antimatter (of which I feel CERN is a more recognizable name than it was back in 2000) seemed to take a back burner to the parallel plot of the pope’s death and finding his replacement. It is hard to focus on both plotlines, especially since both of them had pretty predictable endings. Finally, the romance aspect of this novel seemed quite forced, even to the point where the final scene of the book felt like it was ripped out of a James Bond story. Wherein a modicum of charm from the male protagonist makes his female counterpart swoon with undying affection that wasn’t in any part of the prior plot.

A rough start to the Robert Langdon series, I give Angels and Demons 2.5 stars out of 5.