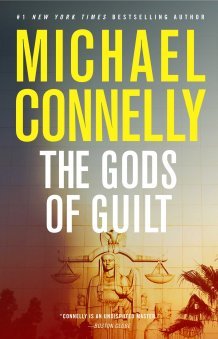 Despite The Fifth Witness leaving the door open to an interesting diversion from the same defense lawyer story we’ve come to know and love from Michael Connelly’s Mickey Haller, The Gods of Guilt puts Haller back in the hot seat as the counsel protecting a digital pimp from a murder conviction. Some of the depth of the Haller character developed in previous books in this series was eliminated after his unsuccessful District Attorney run, but there was still enough humanity in him to advance his story. After all, his coping mechanisms and needs are some of what we all deal with in our own lives.

While I have come to expect a twist ending from Connelly, it was surprisingly missing from this book. For once, Haller’s client wasn’t as bad as everyone made him out to be, and that’s saying something for the digital pimp of Andre La Cosse. Perhaps that’s what made this story a little more uncomfortable than the others: the seedy underbelly of the adult entertainment industry is harder to relate to than simple foreclosures. Still, I can’t help but think that the same strawman tactics that Haller used in this case were quite similar to some of his other defense cases.

All this being said, Connelly is still a master of his craft. The pacing and advancement in the plot was excellent and the peril Haller found himself in after getting too deep into some serious side-investigations helped to make a rather standard book in the series an entertaining read, nonetheless. As was the case in The Fifth Witness, I appreciated the meta nature of this universe where the Lincoln Lawyer movie was a real part of Haller’s life.

Yet another predictable entry in the Mickey Haller series, I give The Gods of Guilt 3.0 stars out of 5.