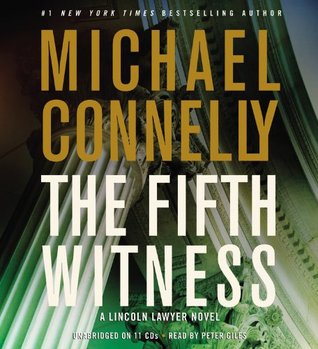 In the fourth installment of The Lincoln Lawyer series, The Fifth Witness follows Mickey Haller as he navigates another murder trial. This time, the real scenario of the foreclosure crisis is brought in to help set the stage for the trial. Using a historical event like this helped to bring the story together in a way that felt more real and relatable than the previous entries in the series. Most Americans I know who were affected by the housing market crash would certainly be entertained by this story of corruption and underhanded dealings, if for no other reason than to justify how screwed up the system is.

Gone from this part of the series is detective Harry Bosch, who I felt distracted from the main storyline centering around Mickey Haller and his court battle in the previous two books of this series. This time, it’s all Mickey. What helped to make this book stand out from the rest was the amount of soul-searching and character development our favorite defense lawyer does throughout the events unfolding around this trial. Because of his work as a defense attorney, it was easy for him to become cynical, thus making his aloof attitude more entertaining than endearing. This time around, he starts to become self-aware and sees that his life isn’t heading in the direction he wants.

I appreciated the slight bit of meta-humor in this book, not only in its title but considering it came out around the same time as The Lincoln Lawyer (2011) movie. And while some of the numerous “sudden evidence” events for the trial was a bit of a cheap way to add twists to the story, Connelly expertly hid the true twist ending until the final moments of the book, something that was somewhat missing from earlier parts of the series. With an interesting nod toward some future storylines, I felt The Fifth Witness is the strongest entry in the series so far.

A great courtroom drama pulled straight from the housing crisis, I give The Fifth Witness 4.0 stars out of 5.