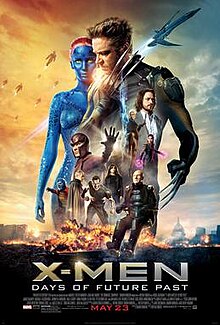 One of the more difficult plots to pull off in a film is that of the simultaneous prequel/sequel. Perhaps the most famous of this plotline is The Godfather: Part II (1974). However, I would argue that X-Men: Days of Future Past perfected it. Just like X-Men: First Class (2011) before it, Days of Future Past takes the retro stylings of its decade (this time the 1970’s) and places a plot intertwined with the well-known figures and events of the time. It also simultaneously puts the X-Men in a dire and hopeless situation in a distant future, thus driving the need to go into the past to fix the initial conditions that got them into this quandary. Plus, most of the film is driven by Wolverine (Hugh Jackman), which just shows how vital he is to the series.

In a return to form that was sorely missing in the previous two films of the series, Bryan Singer directs a film that requires the plots of each of its predecessors to create its narrative. Some will say that the ending negates the need for any of the other films in the saga, but I would almost argue that the other films are needed to show just how much was saved by traveling into the past. This film needed its four predecessors in order to become an awesome wrap-up for the series. It’s definitely my favorite of them all, including its sequel, X-Men: Apocalypse (2016).

Not only is the action incredible in this film, but the character development is commendable. The scene-stealing comedy of Quicksilver (Evan Peters) tied with his slow-motion sequence completely cemented this film as the superhero film all others should strive toward. I would have been fine if the series ended at this point, as it accomplished everything the X-Men series needed to, thus giving Bryan Singer the end of the trilogy he truly wanted to create with the original trilogy.

An incredible film that ties both trilogies together, I give X-Men: Days of Future Past 5.0 stars out of 5.