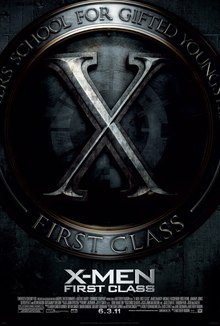 While prequels always hold the distinction of being the one type of movie that you know how it will end, seeing how they get there is certainly entertaining. Much like the Star Wars prequels gave us a point before the original trilogy to learn more about the background of the characters, the X-Men prequels manage to do this, but with a much better result. My only major qualm with prequel trilogies is that, while the mainstays of the franchise were there in terms of characters, the only ones who maintained their actor from the first set of movies were relegated to cameo appearances. This is only heightened by my opinion that the original X-Men trilogy’s cast was perfect in almost every way. That being said, with the prequel trilogy now complete, the younger cast has definitely grown on me as well, James McAvoy’s Xavier being my favorite of the prequel group.

Because X-Men: First Class starts well in the past, it does follow the “origin story” plot, not only of its main players like Professor Xavier (James McAvoy) and Magneto (Michael Fassbender), but of the start of the X-Men themselves. What’s also nice about this is, because it occurs in the historical past, a certain element of “altered history” is present to make the whole plot feel somewhat more anchored in reality. It was also fun to see the X-Men in the trappings of the 1960’s as well.

Of course, since this film came out more than a decade after X-Men (2000), the visual effects were certainly better than they had been. I appreciate the work Matthew Vaughn brought to this series as well. He’s no Bryan Singer, but his directing was at least better than Brett Ratner.

With a retro feel and some flashy effects, this prequel was an entertaining film to watch. I give X-Men: First Class 4.0 stars out of 5.