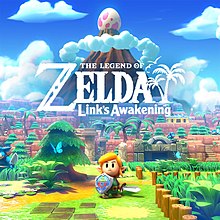 I’m not a huge fan of HD remakes of older games. After all, it’s basically putting a new skin on the same game and asking modern prices for the privilege to play it. When I eventually picked up the Switch version of this classic Game Boy game, I was only partly justified in my skepticism. Sure, I didn’t pay full price for these—albeit absolutely gorgeous—updated visuals, so I feel I still got my money’s worth out of the game (which I still don’t consider to be worth $60).

Having only recently completed the DX version of this game for the first time, I found navigating through Link’s Awakening (2019) was a lot easier the second time around. This was partly due to my memory of the game and my ability to easily complete some of the game’s plot points that weren’t as intuitive in my first playthrough. That being said, there were still a couple of spots near the end of the game that had me scratching my head on how to progress. I worked through them with a glance at a guide (for the “oh, duh” moments), so it’s still completely beatable without help.

The reason why I’m willing to give an extra half star to this game—which already held up after 20 years in its DX version—is the minor improvements to the game that made it much less tedious. Mapping certain controls like the sword, shield, and pegasus boots to the larger array of Switch buttons helped with the pacing. I wasn’t constantly going into the menu to switch out the sword for the one item I needed to perform a specific action. Plus, seeing more of the map other than the singular square of that area also helped keep me from getting as easily lost as I did in my first playthrough.

Stunning HD visual and gameplay update to a game that still holds up, I give The Legend of Zelda: Link’s Awakening 4.5 stars out of 5.