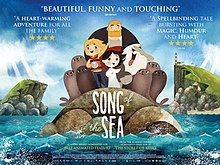 In perusing Netflix a while ago, I came across Song of the Sea (2014), a nominee for the Best Animated Feature Oscar that had completely gone under my radar. At first glance, this film seemed to be by the same people who had done The Secret of Kells (2009). I appreciated the 2D style of the animation from Kells and looked forward to additional stories that could be told in that style. I was not disappointed in the visuals, but I was confused, perhaps more than I should have been with the plot.

Don’t get me wrong: the plot is pretty simple. I certainly was able to understand the story of a brother and his mystical mother and sister. Some of the plot points seemed pretty cliche, all things considered. What I had trouble with was some of the Irish folklore that ran throughout this movie. Perhaps it was all part of a singular “fairy” portion of their lore that tied it all together, but it seemed to jump around from glowing seals to stone singers to owl grandmothers with little connection between them.

Despite my lack of understanding of Irish folklore, Song of the Sea is still a touching film. There’s genuine emotion in these animated characters, and I could really relate with the father (Brendan Gleeson), as well as with Saorise (Lucy O’Connell). The visuals and fantastical elements do work well for the animation style, and I can’t wait until I can watch the next film in this “trilogy,” the most-recent Wolfwalkers (2020). I always appreciate foreign animated films, so I would highly suggest that people who are tired of the same kinds of animated movies put out by American studios give movies like Song of the Sea a watch.

Unique animation steeped in Irish folklore, I give Song of the Sea 4.0 stars out of 5.