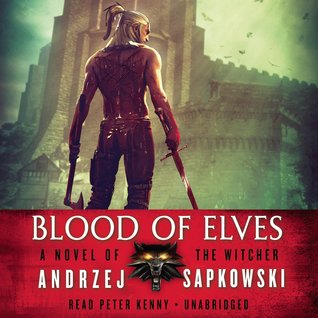 I’ll admit that I had a bit of a head start understanding the Witcher universe when I picked up this book. I’ve played a few hours of The Witcher 3 on my Switch, and I watched the first season of the show on Netflix. Would the lack of this prior knowledge have hurt my chances of understanding this high fantasy? Not likely. Arranged as a series of vignettes, Blood of Elves reveals its characters and setting based on a collection of almost everyday scenarios. While this approach made understanding the overarching goal of the series difficult to discern, it did make the characters quite a bit more realistic and relatable.

When it comes down to it, this book is about its characters. Geralt, Ciri, and Yennefer all stood out to me as unique and well-rounded individuals who each had their own stories to tell and plotlines to follow. And while their interactions are all intertwined in some way, their individual journeys allow them to shine in their own way. Perhaps this is why I enjoyed listening to this audiobook: it wasn’t so focused on building the world where these characters lived (like most Tolkein-esque high fantasy). Instead, this book made sure I understood who these characters were and what challenges they have faced and will face in the future.

Two scenes/stories stood out to me in this book that I feel need special praise. First, I have never before read a book that had an entire fight/training sequence performed exclusively in dialogue. There were no character actions other than what was described through what the individuals said to each other. To be able to do this so well is an achievement in writing in and of itself. Secondly, I found the story where Geralt meets a monster “expert” to be incredibly humorous. This bit of levity helped to keep the book from getting too dark and morose, which was welcome considering some of its content.

A fantastic character-based high fantasy, I give Blood of Elves 4.5 stars out of 5.