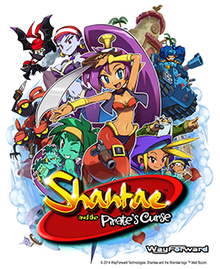 A couple of years ago, I started hearing about a cult classic Game Boy Color game known as Shantae. While this game released near the end of that handheld’s life cycle, there was plenty of buzz about how it was a solid platformer with plenty of potential. Fast forward eight years and the first sequel, Shantae: Risky’s Revenge, made its appearance as a virtual game on the DSi. I happened to jump into this series with the 3DS virtual title, Shantae and the Pirate’s Curse and I certainly enjoyed the pseudo-Metroidvania approach that WayForward took with this franchise.

While I would have liked to have found a cartridge version of this game, I eventually settled on buying it from the eShop. I’m glad I did, as it allowed me to play the game instead of just thinking about it. Overall, it’s a solid action platformer with plenty of upgrades that lend themselves to re-exploring some of the areas that I had already beaten to find secret areas and items. And while it was a pretty short game in my experience, the world and the characters were well-defined (in more ways than one) and entertaining enough to keep me progressing through the story.

Of course, one of the facets of this franchise is some amount of fan service (which is mostly why this has a “T” rating). While there’s nothing too explicit, you might want to know who you’re playing around in case they catch a glance of your screen out of context. Still, I did find the 3D effect on the 3DS to be visually attractive, even if it was only used to its full extent a handful of times (again, most of them being of the “fan service” variety).

A fun action platformer with a unique protagonist, I give Shantae and the Pirate’s Curse 3.5 stars out of 5.