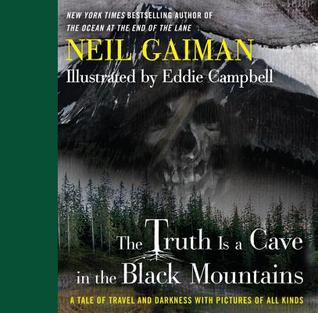 As I’d realized in previous works of Neil Gaiman’s that I’ve read, he excels at (at least) two things: short stories and fairy tales. One could argue that the latter is a subset of the former, but longer works like Stardust cause me to separate the distinction. Perhaps this book was made all the more magical by its audiobook production. Not only did the author himself read it, but it was accompanied with some great atmospheric music to enhance the mood produced by Gaiman’s words. I missed the illustrations this book sports, but I think the words can speak for themselves.

In terms of a fairy tale, The Truth is a Cave in the Black Mountains manages to contain the usual flare of morality and truth against a backdrop of riches and mysterious wonder. I’m almost surprised there aren’t more authors writing modern fairy tales as Gaiman has since there is a precise formula here that Gaiman has consistently used to create these fantastical narratives. After all, most fairy tales are trying to teach something intrinsically human, and this one touches on the oft-repeated moral of greed versus the consequences of obtaining wealth.

Of course, much like Gaiman’s other “fairy tale” works, this story is intended for adults. Sure, traditional fairy tales are gruesome and are used to scare children into submission. Regardless, the lesson contained in this story is something most adults need to hear. We all love the idea of the “get rich quick” scheme, but there are often secondary effects that we overlook when we head out to seek our fortunes. Perhaps if the more adult aspects were toned down a little, it could be used to teach children about these moral pitfalls before they encounter them, instead of after the fact.

Another superb adult fairy tale, I give The Truth is a Cave in the Black Mountains 4.0 stars out of 5.