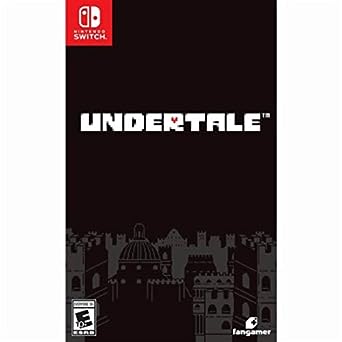 By the time I had the chance to play Undertale (on the Nintendo Switch, no less), most of the surprising revelations about its battle system were already spoiled for me. Regardless of knowing the unique playstyle for this game, I tried my best to play by the counterintuitive methods that set this game apart from others of its genre. And while I didn’t get the true pacifist ending for some reason, it was still an enjoyable and humorous game. Despite its somewhat shorter length, I still think making it any longer would have ruined the tight storytelling.

Now, Undertale is by no means a perfect game, and I’m sure the diehard fans of this franchise will hate me for saying this. The visual style was pretty good for a retro throwback, but it felt inconsistent from place to place, almost like it didn’t know if it wanted to be 8-bit or 16-bit. Similarly, the fantastic music and audio didn’t fit this visual aesthetic for most of the game, which always seemed to throw me. I guess I would expect all the game elements to be aligned somewhat, much like Shovel Knight stuck to its retro roots in every aspect.

Of course, I can forgive plenty of these inconsistencies with the understanding that only one person made the whole game. The fact that such a genre-bending game like this could come out of the efforts of one man says something about how revolutionary it is. Having also played the first chapter of the sequel, Deltarune, I can see that a little bit of polish can go a long way to improving the base concept that Undertale created. Plus, how often do you play a video game where there is even a choice not to fight at all? The ubiquity of violence across almost all genres of video games makes Undertale an odd little gem that’s worth playing at least once.

A unique genre-bender that needed just a touch more polish, I give Undertale 4.0 stars out of 5.