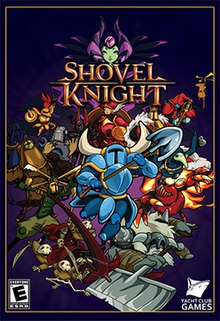 I grew up in the era of retro video games. My favorite was the Mega Man series, but I appreciated what games like Super Mario Bros. 3 and Zelda II: The Adventure of Link were trying to accomplish. While Shovel Knight isn’t a spiritual successor to any one game, it lovingly paints the pixelated beauty of classic video games in vibrant homage. I played through this game and all three of its free DLC add-ons on the 3DS, and I found the stereoscopic effect to be just as mesmerizing as the stunning visuals it used to create the effect.

Shovel Knight managed to create a world filled with lore and unique characters that far surpasses anything programmed on the NES. Granted, there was a bit of a cheat in not being wholly constrained to NES graphics or audio, but I’d rather have a great game that fudges some nostalgia than one that suffers because of it. Additionally, I think the soundtrack for this game is the height of the chip-tune style. I regularly find myself jamming out to any number of the songs as they rotate through my shuffled music collection (I’d list my favorites here, but the list would be too long).

While the 3DS version does not contain the additional Shovel Knight Showdown included in other versions of Treasure Trove, I don’t feel too put out by it. After all, I thoroughly enjoyed all four campaigns contained in the base game, taking my time to learn each new character’s movement quirks and play-style. And while the concept of a knight wielding a shovel seems ridiculous, Shovel Knight takes itself very seriously with a healthy dose of tongue-in-cheek. Even if you never grew up with the games Shovel Knight drew inspiration from, I suggest you pick it up and play through it, regardless.

A brilliant and vibrant homage to classic video games, I give Shovel Knight 5.0 stars out of 5.