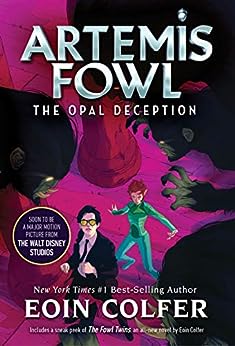 As a fan of the three-act structure that trilogies can provide, I’ve found over the years that the fourth book in a series generally determines what the style of future books will be. Plenty of series have strong plotlines and character arcs that span multiple volumes, but some series settle into a tried-and-true formula that works for them. For The Opal Deception, the fourth book in the Artemis Fowl series, it’s the latter. Granted, the series is meant for grade-school readers, so it’s not entirely surprising that the series has become formulaic.

There was an amount of status quo (and returning to it) that had to happen after the events in The Eternity Code, which is where The Opal Deception came in. It honestly feels a little like a half-step backward for the series, or at least a realignment to get the characters all back together to continue on future adventures. By now, these adventures all seem to have the same checklist of events that need to happen. Artemis needs to be clever and smart. Mulch needs to be gross and flatulent. Holly needs to come in and save the day in her magical way.

About the only thing that was different from previous books in the Artemis Fowl universe was the titular villain: Opal Kobol. Of course, this antagonist gave more of a Bond villain vibe than any of the previous ones. This makes me think the series will be progressing with this kind of James Bond formula, which contained singular villains, fancy spy technology, and almost ridiculous action sequences. In fact, I’d almost peg the Artemis Fowl series as a teenage version of James Bond with a heavy dollop of fantasy thrown in to keep kids entertained.

A formulaic stabilization of the Artemis Fowl series, I give The Opal Deception 3.5 stars out of 5.