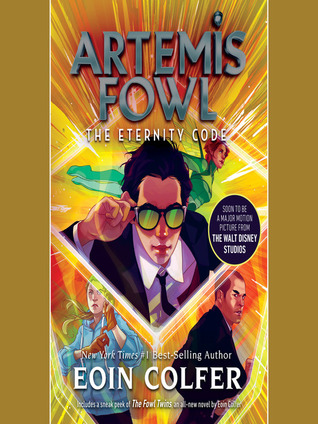 After the last two adventures in the Artemis Fowl series helped to reunite the titular character with his family, it was entertaining to watch him strike out on his own. This was for no other reason than to prove he has the criminal chops his family name is known for. While decidedly middle-grade to young adult in tone, The Eternity Code is still an entertaining read. One might need to have read the previous two volumes to know who all the main players are, but at least the story is strong enough to carry the reader through to the conclusion without too much hassle.

While I appreciated the “on top of it” style Artemis had in Artemis Fowl, I could also enjoy the cracks of vulnerability in his façade present in The Eternity Code. After all, Artemis is merely a teenage boy, and it helps to ground him in reality when the chips are down, and his plans don’t succeed from the start. Perhaps my favorite part of this book was the increased presence of Juliet, who seemed to break as many stereotypes as kneecaps (this is also partly because she reminded me of Bastille from Brandon Sanderson’s Alcatraz series).

As I mentioned earlier, the tone of this book is decidedly aimed at children. This was likely why a lot of the bathroom and “gross-out” humor played a more substantial part in this book than in previous entries of the series. And while there were a few new and interesting characters, they almost seemed to be forgotten for most of the book after being introduced early on. Perhaps they play more significant parts in future books in the series because, in this singular book, it felt like they were woefully underutilized. Even with a somewhat definitive ending, I look forward to the next adventure the Artemis Fowl series has to offer.

An entertaining military fantasy heist, I give The Eternity Code 4.0 stars out of 5.