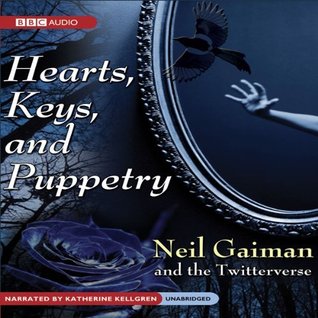 I’m all for interesting ways to write books, but using a game of “Twitter telephone” is a new one for me. In fact, can we even call this book written by Gaiman at all? Sure, he’s great at these types of modern fairy tales (like Stardust, for instance), but he only got the ball rolling on this story and let the internet write the rest of it. Granted, he was the one who chose which segments to include next, to help guide it into some limited form of coherence, so maybe he “wrote” it after all?

It’s not that Hearts, Keys, and Puppetry isn’t an utterly incoherent story; it’s that it lacks focus at times. Plenty of interesting subplots could have been explored but were quickly abandoned as the story switched over to a different writer. I’m almost glad this book was as short as it was because otherwise, I don’t know how much more of the plotline whiplash I could take. Perhaps it’s a good thing for readers everywhere that stories aren’t normally created 140 characters at a time. Not that it can’t be done, but that the longer scope of the project is lost in the changing points of view.

If anything, this book reminds me a bit of Forum Role-Playing stories. Each individual controls a character, and everyone writes a segment at a time to advance the plot. The problem with this approach (other than people not committing to contributing) is that each individual has an idea in their mind of where the story should go. Rarely do those ideas match with the rest of the group. If this story were edited down to a few base ideas that Neil Gaiman would then use to create a longer-form and coherent story, then maybe this experiment would have merit. As it is right now, Hearts, Keys, and Puppetry displays the true randomness of the internet.