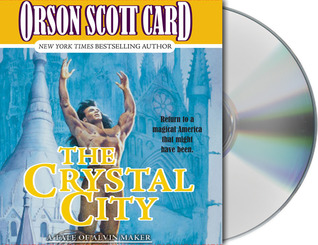 With the end of this series in sight, it seems that the focus of The Crystal City is back on track. That being said, there are a few curious omissions that made it somewhat frustrating to read. I understand that some stories aren’t meant to be part of full books, but when these side short stories sound much more interesting by their mere inference, then I wonder why they weren’t included in the main storyline to begin with. Still, there were enough exciting developments in The Crystal City to keep me wondering what the conclusion will bring in the next book.

While I appreciated the historical name dropping earlier in the series, now they seem to be coming left and right, with little-to-no impact on the story other than to say, “Look! Here’s someone you should know, and here’s how they’re different now!” Part of this is due to the short stories that introduced interesting characters like Jim Bowie and Steve Austin. It could be the fact that the altered timeline is so far away from known history that figures like Abraham Lincoln don’t seem to have nearly the same impact as they did in our current understanding of history.

It was nice to see some character development, especially in Arthur Miller, who up until now had felt more like a sidekick and shadow to Alvin and not necessarily a full character in his own right. I also appreciated some of the more grandiose events, like the eruption of a volcano, even if it felt a little like cutting off another sub-plot that could have had some incredibly interesting outcomes. In the end, it is nice to see some of the loose ends starting to be tied up, even if I don’t enjoy these books nearly as much as when I started six books ago.

A foreshadowing of the end of the series, I give The Crystal City 3.5 stars out of 5.