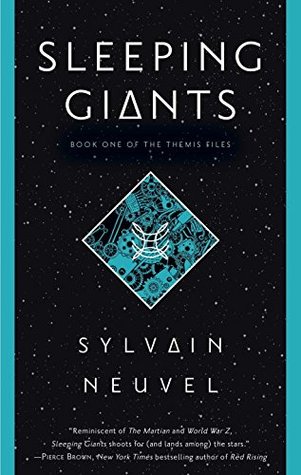 After my slight disappointment with Mecha Samurai Empire, I was pleased to find that a book that actually knows how to do “mecha” right already existed years before Mecha Samurai Empire was released. Taking a somewhat unique approach in its narrative structure, Sleeping Giants uses a series of interview transcripts to tell the story of discovering the parts of an ancient, giant robot and learning how to pilot this unique piece of equipment. There aren’t any dialogue tags. There aren’t any direct action sequences. There are just words describing the events as they happened. Somehow, it totally works.

I seriously couldn’t get enough of this book and basically devoured every word. I was a little disappointed with the semi-cliffhanger ending, though. Just as everything was starting to finally come together, it just kind of ends. Sure, many of the large plot movements reached a momentary conclusion but now I really want to know what happens next. My only other qualm was the “exposition character” who was dropped into the narrative about half-way through to explain all the unexplainable bits of the story. It seemed like a cheap way to give information that wouldn’t have been naturally revealed.

What’s perhaps the most interesting with the minimalist way the story is written in Sleeping Giants is how strong the characters come across. Even if it’s only interview transcripts, the pauses, snark, and other personality traits are just as obvious as if I could see them talking across the table from me. Judging by the acknowledgments section of this book, I certainly can’t wait for this to be made into a movie. I’m sure it will be just as exciting to see everything on the big screen as it was to read about it line-by-line.

A unique narrative method that had me ravenously reading, I give Sleeping Giants 4.5 stars out of 5.